Founded in Hamburg in 1906 by three businessmen who set out to perfect the design of the newly invented fountain pen, Montblanc has been synonymous with finely crafted writing instruments for more than a century. The Montblanc Meisterstück, first produced in 1924, is without doubt the world’s most iconic pen, favoured by stars and statesmen, treasured by lovers of beautiful objects, chosen to mark special occasions and handed down from one generation to the next.

Montblanc, which belongs to Compagnie Financière Richemont, is today present in over 70 countries via some 5,000 sales outlets, including more than 450 exclusive boutiques. Its white star emblem, inspired by the snow-covered summit of the Mont Blanc, Europe’s highest mountain, is recognised as a symbol of excellence throughout the world. 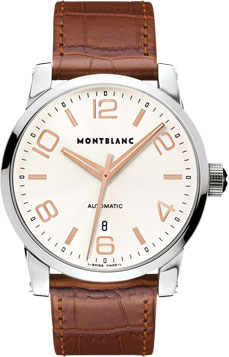 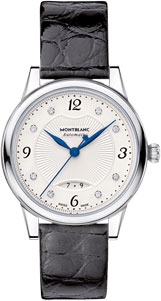 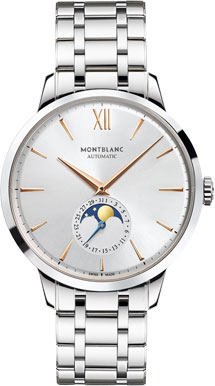 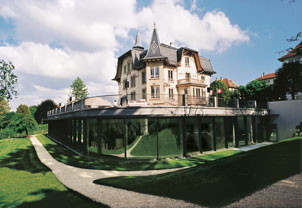 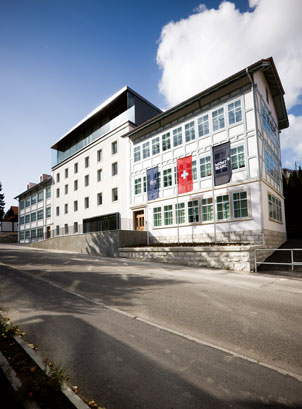 Deep in the Swiss Jura Mountains, the heart of that country’s world-renowned watchmaking industry, Montblanc’s watch manufacture in Le Locle occupies a beautifully restored villa built in 1906, the very year Montblanc was founded. The workshop in Le Locle prides itself on its unique combination of tradition and innovation, producing timeless timepieces inspired by Switzerland’s watchmaking heritage. The exceptional concentration of savoir-faire to be found in Le Locle means that Montblanc is one of only a handful of manufacturers capable of creating its own movements, such as the famous MB R100 calibre of its emblematic Nicolas Rieussec Monopusher Chronograph.

Montblanc’s second watch manufacture, the Institut Minerva de Recherche en Haute Horlogerie in Villeret, has a long and illustrious history. The Minerva workshop was originally founded in 1858, and became renowned for its complex handmade movements. Today, the manufacture is one of the few remaining exponents of the art of haute horlogerie, producing extremely small numbers of exceptional timepieces that both respect and renew the proud tradition of Swiss watchmaking. Every watch in the Montblanc Collection Villeret 1858 is individually numbered, making each a true rarity and collector’s item.

Montblanc leather goods meanwhile concentrated in Montblanc’s Pelleteria in Florence, the historic heart of Europe’s leather trade. Here, artisans whose savoir-faire is passed from one generation to the next turn the finest skins, from sensual natural calfskin to precious exotic leathers, into exquisite accessories. From the small leather goods that have always accompanied Montblanc’s writing instruments, to larger pieces, including handbags for women and business or travel bags for men, all come to life in this unique atelier.

In 1906, two German businessmen – Alfred Nehemias, a merchant from Hamburg, and August Eberstein, an engineer from Berlin – returned from a trip to the United States. There, they had been fascinated by a new invention: the fountain pen. Though still imperfect, this ingenious design, containing its own ink tank, dispensed with the need for a separate inkwell – an important consideration in an era when the rapid development of rail, road and air transport meant that people were travelling more than ever before. Back in Hamburg, they formed an agreement with Claus-Johannes Voss, a stationery trader, to produce their own version of the new writing instrument.

It was more than two years before they were able proudly to present the result of their endeavours: the premium-quality Rouge et Noir fountain pen. Its name, inspired by the famous novel by Stendhal, gave an early indication of the company’s literary leanings. Advertised as “a fountain pen that does not make blots”, it became so successful that it was soon widely known by the nickname “Little Red Riding Hood”, in reference to its distinctive black ebonite body and red cap.

In 1909, the company, then trading under the name Simplo Filler Pen Co. GmbH, launched a new design incorporating a number of significant improvements. What better way to express this new summit of technical achievement and apotheosis of European craftsmanship than by an analogy with Europe’s highest mountain? The Montblanc fountain pen was born, the white tip on its cap anticipating the future emblem of the brand.

By 1913, the new fountain pen had become a best seller. The company changed its name to Montblanc Simplo GmbH and adopted an instantly recognisable trademark: a six-point white star representing the snow-covered summit of the mountain Mont Blanc with its six glaciers. Soon, the new logo would be famous throughout Germany and beyond.

In 1919, the first store selling exclusively Montblanc products – not only pens, but also ink, writing paper and mechanical pencils – opened in Hamburg, a precursor of modern luxury-brand boutiques. It was followed by others in major cities across Germany, as well as outlets in London, Paris and Barcelona. Meanwhile, the company’s advertising department adopted innovative new methods inspired by trends in America. Huge Montblanc fountain pens were mounted on cars and the company name was painted on the side of airplanes, while a photograph of Paris in the 1920s shows a Montblanc advertisement covering the entire facade of a building.

The true breakthrough, however, came in 1924 with the launch of the Montblanc Meisterstück fountain pen. Its name proclaimed it to be a masterpiece, and a masterpiece it was – so much so that the original design in black precious resin with its three gold-plated rings has remained virtually unchanged to this day. The engraving “4810”, recording the height of the Mont Blanc in metres, was added to the Meisterstück’s gold nib in 1929, while – as the collection expanded to include other writing instruments – the figure “149” came to designate the original fountain pen with its characteristic nib size.

In 1935, Montblanc established a workshop near Offenbach, a town at the time famed for its leather craftsmanship, to create luxury small leather items, including pen pouches, notebooks and writing cases. Even at this early stage, the company recognised that such accessories were a natural complement to its writing instruments and sought out the most highly skilled artisans to produce them.

Though the Second World War brought destruction both to the Offenbach leather goods workshop and to Montblanc’s Hamburg manufacture, the company recovered in the post-war years, with the Montblanc Meisterstück in particular cementing its reputation as the writing instrument of choice for both stars and statesmen.

As a global luxury goods market emerged in the 1980s, Montblanc focused its efforts on high-end products, notably launching the Meisterstück Solitaire collection, the first precious metal edition of the Meisterstück, in 1983. Three years later, the famous advertising slogan “Montblanc, The Art of Writing” clearly established Montblanc’s cultural connections. Back in the 1930s, the company had been famous for its literary competitions and it now embarked on an array of international sponsorships in literature, ballet and music, marking the start of an enduring commitment to the promotion of the arts in many forms.
Throughout the 1990s, innovative initiatives in the world of culture accompanied Montblanc’s emergence as a luxury maison. In particular, the Montblanc de la Culture Arts Patronage Award, established in 1992, became the one and only international award to honour outstanding patrons of the arts in different countries. The Limited Edition Patron of Art pen, created by Montblanc to mark the occasion, was the first of the company’s exceptional limited editions, dazzling demonstrations of its craftsmanship, which are eagerly awaited by Montblanc connoisseurs the world over.

Having for nearly a century been associated with precision craftsmanship and the luxury of taking time, it was only natural that, in 1997, Montblanc should found Montblanc Montre S.A., its own watchmaking workshop in Le Locle, in the heart of the Swiss Jura. The Meisterstück watch collection was the first of a succession of masterpieces to emerge from this unique manufacture, which has since been complemented by the takeover of Minerva, a small traditional workshop in Villeret famed for its exceptional handmade movements.

To mark its centenary in 2006, Montblanc unveiled the Montblanc Diamond Cut, an exclusive cut replicating the company’s celebrated star emblem in three dimensions. This glittering achievement – making Montblanc the first company ever to have a patented gem cut derived from its logo – signalled the entry of Montblanc into the glamorous world of fine jewellery.

Culture, quality, craftsmanship and continuity – these are the values which Montblanc carries proudly into the 21st century, already writing another chapter in its history.